skip to main | skip to sidebar

Just because you put the word "invincible" on your toy does not make it a) indestructible; b) inviolable; or c) unbreakable.  If such a notion stood up to theory, I would just stamp the word "invincible" on pretty much everything I touch, especially knowing that I may touch it after consuming more than 200 mg of caffeine at any one sitting, and my life would be full of the things I wish I hadn't broken.

I wonder, who are you talking to here?  Dogs?  Because my own particular dogs can chew through an airplane wing in about 22 seconds (no worries - my dogs are not allowed on airplanes, you are safe).  Certainly you are not marketing to cats - these toys are pretty much twice their size, and if we are talking about my cats, then they are just going to give any dog toy the hairy eyeball.  Ah.  Babies.  You must be talking to babies.  Who have no teeth.

Thank you for letting me figure this out on my own.  Sometimes it helps to put things into words.

Angus vs. The Stapler


Angus has been so perfect since we adopted him almost 3 months ago.  He is just this lovely, well-mannered, beautiful dog who does absolutely nothing wrong.  Which is a little sad, because we like to laugh when things go wrong.  But he's sweet and sleepy and we are just in love with him.

Many people ask about the slobber factor in Great Danes, to which I normally reply that they aren't so bad.  They do tend to create their own weather patterns over the water bowl, but other than that, they tend to keep the drool to a bare minimum.  Angus, however, defies all of our previous experience in this area.  We now have weird crusty slobber marks on the ceiling.  We have 20 foot ceilings.  That stuff is not coming down.  It's on the television, on doors, on the refrigerator, on the walls, on the cats.  Last night Angus shook his head and fifteen feet away the product of that shake landed squarely on Uma's head.

For the first couple of months it seemed that Angus was not interested in chewing on anything other than his own food.  Therefore, I was surprised the other day when I was working up in the studio and looked down to see him trying to eat my stapler.  Let me tell you, it was moist.  There was a definite end result in his mind.  I do not know what it was. 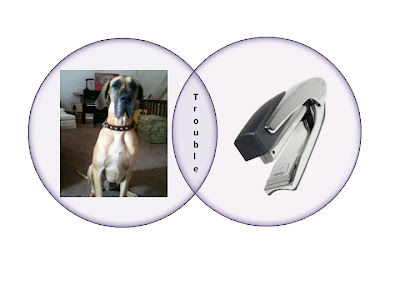 We Are Still Working Over Here


Hi there.  It seems that when someone starts a blog, there are certain expectations that are created regarding the frequency and quality of postings.  After a long hiatus, complete with verbal lashings from a few and a swift kick in the shin from one, I am going to try to meet these expectations, if only to avoid the stress that comes with such lashings.  Thank you for continuing to read and for what seems to be eternal optimism from some of you that I will post something new.  I assure you, things are indeed being eaten.  For now, however, a quick post (this is for you, T). 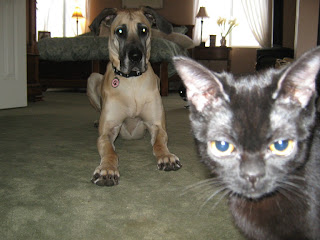 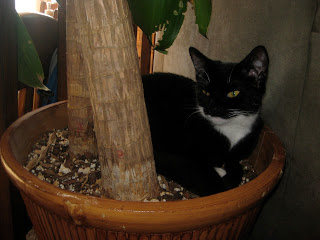 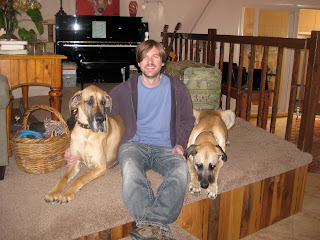 Angus, Mike & Ivy.  Ivy has only tried to eat him twice.

3.  The emmi website is now fully functional!  You may now purchase collars and leads for your dogs until your fingers bleed!

A timeline of the gradual degradation of the Mountain Alder
that we planted this summer in honor of Mike's grandfather: 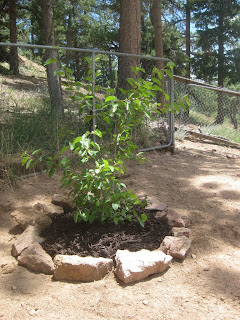 June - Our beautiful Mountain Alder.
Thriving in our extremely acidic soil consisting of
decomposing granite, which we thought would be
the only hurdle to clear.

Evidently we were mistaken. 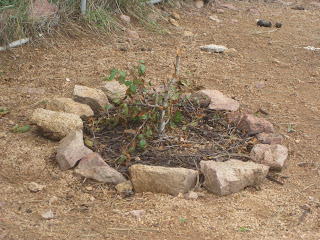 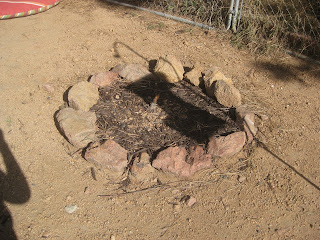 October - Completely gone. Two inches of stump.
Ivy has never been accused of not being thorough.
Posted by emily at 6:28 PM 0 comments

Mike and I just wanted to say thank you for all the flowers, plants, donations to rescue groups and humane societies, cards, calls and emails. And mostly, thank you for understanding the connection that we had with our beautiful boy. It is so very clear to us that the light in his heart and soul was visible to everyone he met.

In other news, Ivy seems to be giving us a break from constantly eating everything in sight except for an apple pie that we were actually really looking forward to eating ourselves. I am sure this is a temporary abstention, as she is a little down from missing her big brother.
Posted by emily at 9:30 AM 0 comments 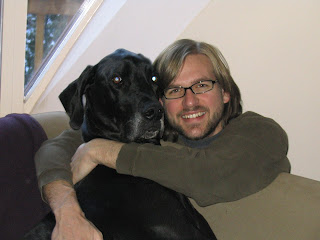 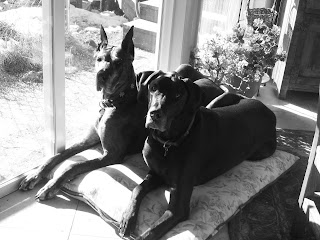 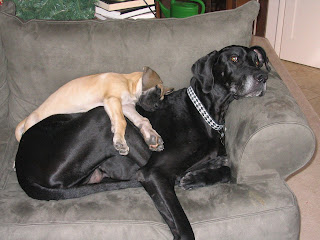 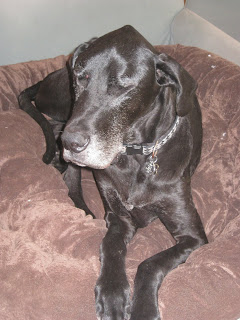 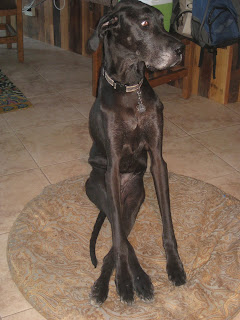 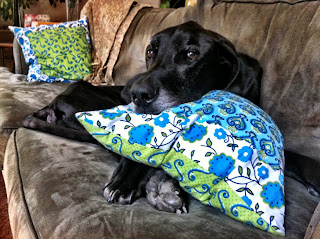 I Really Don't Make This Stuff Up

I am always impressing myself, as I am sure you do as well. The other day I decided to dismantle a rather ugly fence in the backyard that has been driving me nuts for about 10 years. There was this incredibly stupid bar that ran across the gate, so every time I went down to the chicken coop I had to duck down at a right angle to get under it. And almost every time I did I bumped my head pretty hard. I had asked a friend to help me take it down, thinking it wasn't a job for just one person, but as said friend was selfishly off getting married and subsequently honeymooning, I decided to just do it myself. You can only bump your head so many times before you are forced to start asking yourself the definition of insanity (according to my mother, doing the same thing over and over again and expecting different results - perhaps that was actually Einstein, but my mother is just as brilliant). And I hit my head so hard the night before that I actually made myself a little nauseous. So no more insanity. We are people of action in this house.

After using my do-it-herself tools, including but not limited to, rubber mallet, socket wrenches, zip ties, metal sharp thingy, crow bar type thing that doubles as a pencil (yes a pencil!), and sledgehammer (please - someone needs to invent a sledgehammer that is light as air but that gets the job done. Those things are ridiculous), I ended up with a massive disaster area. I put the fence fasteners in a large ziplock bag so I wouldn't lose any of the parts as Mike seems to think that some delusional will want a free ugly fence off of Craigslist (no, we're not going to do that, honey. No delusionals other than ourselves up here at the house). I left the ziplock bag on the table for a day and kind of forgot about it while I ran some errands.

Poor Milo - he is so hungry. He is practically skeletal, but we are feeding him a ton of food. I guess once you greet the century mark in life, you just get super skinny. Wow, what a generous tradeoff. At any rate, he is evidently so hungry that he tore into that bag of fence fasteners like nobody's business. I don't think he actually ingested any parts once he figured out that they weren't very accommodating to the teeth. Seriously, it's a texture thing, people. 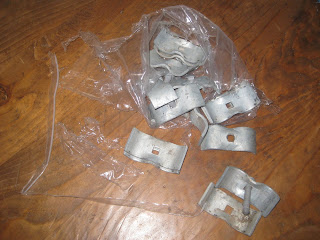 Pet collars and leashes, lovingly handcrafted for your furry friend!

You are visitor number:

emily
We live in the mountains of Colorado with our Great Danes, Ivy and Angus. Our Great Danes Milo and Claire, and Rhodesian Ridgeback, Charley, live with us in spirit. We recently adopted two cats, Eli and Uma, who are really more like dogs. We also have many chickens of varying breedage. They do not seem to like us.